For 8 in 10 Americans, Nation’s Future Is Cause of Stress

WASHINGTON, D.C. — After sliding in March and April, Americans’ ratings of the nation’s economy remained low in May and have not improved at the start of June. The latest poll was conducted May 28-June 4, just prior to the federal May jobs report showing an unexpected decline in unemployment.

According to the poll, fewer than one in four U.S. adults, 23%, rate current economic conditions as excellent or good, essentially tying last month’s low point, the lowest that Gallup has recorded during the coronavirus pandemic. At the same time, while also low, more Americans today (33%) than in April (22%) think the economy is getting better.

The fact that more Americans today than two months ago believe the economy is improving may reflect the partial reopening of commerce in most states since Memorial Day. However, it is still a long way from signaling that Americans perceive the economy to be on the verge of a comeback.

Even with Americans’ slightly improved outlook for the economy, their assessments remain much less positive than at the start of the year when economic confidence was the highest Gallup had seen since 2000. 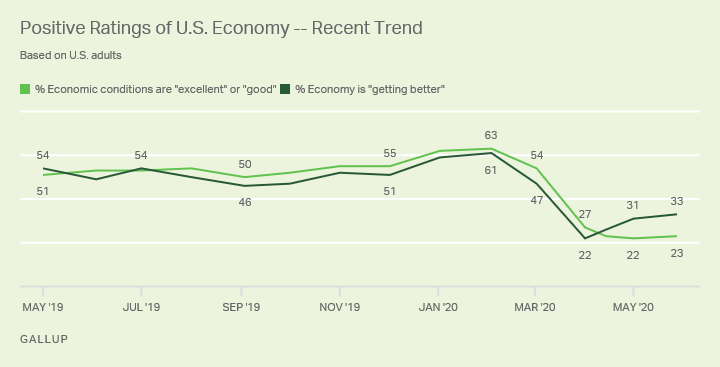 Ratings Have Been Worse in the Past

Similar perspective can be brought to bear on Americans’ outlook for the economy. Whereas 33% today believe the economy is getting better and 62% getting worse, the negative outlook averaged 78% throughout the 2007-2009 recession, reaching as high as 87% in June 2008. In other words, as much as optimism about the economy has slid since February, the metric has shown the capacity to go much lower.

Even before economists this week declared the U.S. economy to be in a recession, 71% of Americans believed the economy was in a recession or a depression and were expressing drastically reduced confidence in the economy compared with the start of the year.

Knowing the economy is in a recession could send Americans’ economic confidence even lower in July. An almost assuredly grim second-quarter report on Gross Domestic Product may only exacerbate this pessimism. On the other hand, if the June jobs data reported next month denotes further declines in unemployment, or if this month’s federal retail sales report shows a surge in consumer spending, many more Americans may believe the economy is improving. Regardless, as suggested by the recent stagnation in ratings of current conditions, it may take longer for consumers to perceive that the actual performance of the economy is strong than to perceive conditions are improving.