‘Magic mushrooms’ may soon be legal in Oregon

Oregon State Police have abandoned a longstanding practice of spot testing drugs found during traffic stops out of fear that troopers may be exposed to the synthetic painkiller fentanyl.

The move comes as police nationwide, including the U.S. Drug Enforcement Administration, shift away from field testing drugs due to a rise in fentanyl trafficking and concerns about police safety.

Portland police officials said they, too, plan to phase out the tests sometime this year. Other agencies, including some in Oregon, have stopped short of scrapping the tests but have stepped up training and rules for handling the powerful narcotic.

Fentanyl is considered to be about 200 times more potent than morphine. Oregon last year recorded an all-time high in fentanyl overdose deaths – 58 – compared to one just two years earlier. 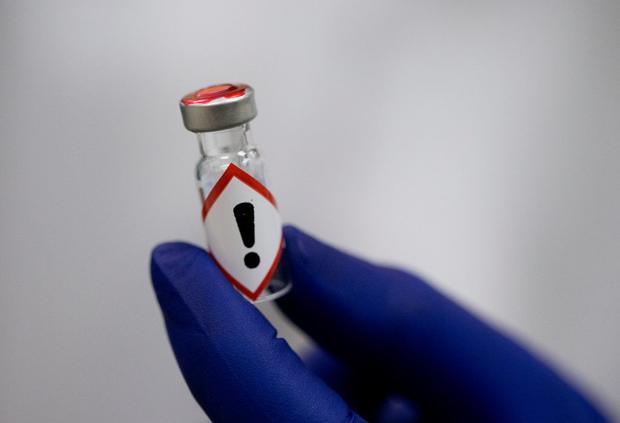 Last year, the number of fentanyl cases submitted to the state police crime lab for analysis jumped to a record 45. Three years ago, the lab worked just two cases.

The elimination of field testing, for years a standard practice for patrol officers, has broad implications for drug possession cases moving through Oregon’s criminal justice system.

The test results are used in the early stages of a criminal case and typically are key to establishing probable cause to make an arrest, charge someone with a crime or take a case to grand jury in drug possession cases.

In cases quickly resolved in plea deals, field test results often serve as the only scientific evidence against defendants, prosecutors and defense lawyers say. Drug cases that go to trial require a more thorough analysis from the state crime lab.

“I have had dozens and dozens of clients plead guilty based on just that,” said John Robb, a criminal defense lawyer in Portland. “What the (field) test did was add an extra layer of scientific veneer to the rest of what the arresting officer had to say.” 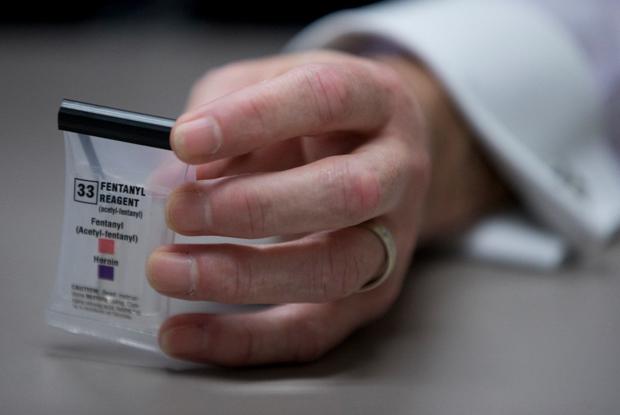 A field test kit is shown above. Using a kit no bigger than the palm of their hands, officers scoop a small amount of the drug into a plastic packet and add a chemical that turns colors depending on the substance.

Without the field tests, some Oregon prosecutors say they will await a chemical analysis from the state police crime lab before filing charges. Those analyses can take weeks or even months.

Prosecutors say the shift away from field tests means law enforcement authorities will rely even more on the state crime lab, adding to the agency’s testing backlog and potentially delaying some drug investigations.

Police commonly use the tests in roadside stops when they find suspected drugs, such as methamphetamine or heroin.

Using a kit no bigger than the palm of their hands, officers scoop a small amount of the drug into a plastic packet and add a chemical that turns colors depending on the substance.

No state trooper in Oregon so far has reported ill effects from handling fentanyl – often found in pill form but sometimes also in a powder.

But in isolated cases across the country, officers have unintentionally ingested the drug while on the job, including an Ohio officer who was treated for an overdose after powder landed on his uniform. 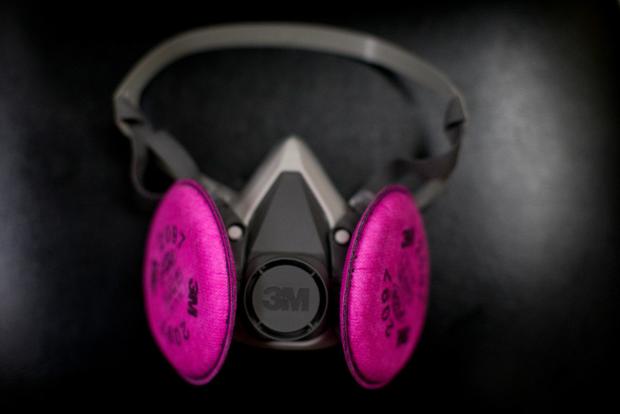 Beth Nakamura I The Oregonian/OregonLive

Forensic analysts at the state crime lab use masks when handling a substance they suspect is fentanyl. The drug is a potent painkiller increasingly trafficked nationally on the illicit market.

State Police Superintendent Travis Hampton told The Oregonian/OregonLive that he decided to halt most field testing in response to concerns raised by troopers.

“This was simply a risk mitigation decision to protect our employees (and) their family members that may come in contact with their uniforms and the citizens that may accidentally be exposed to fentanyl during an attempted roadside test,” Hampton said in an email.

The new policy allows a sergeant to approve a field test in some cases, including those involving an overdose death where investigators want to quickly identify dealers and “disrupt the supply chain.”

Cam Strahm, assistant special agent in charge of the DEA’s Portland office, said policing illicit fentanyl and its potent cousins are “one of the highest, if not the highest, priority for the DEA in the state of Oregon.”

Last year, the number of fentanyl cases submitted to the state police crime lab for analysis jumped to a record 45. Three years ago, the lab worked just two cases. 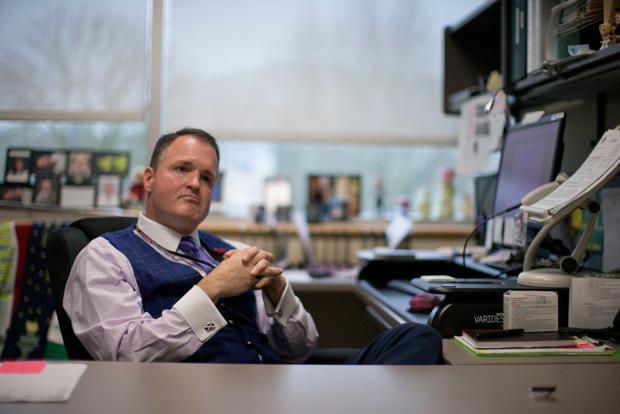 Beth Nakamura I The Oregonian/OregonLive

It’s too soon to say how the policy shift will affect the workload, said Jon Dyer, pictured above, who oversees the lab’s drug analysis unit in Portland. The lab is one of five state crime labs and the largest in Oregon.

Still, fentanyl remains a small portion overall of the cases that move through the lab. Last year, police statewide sent in more than 11,000 samples in drug investigations — about two-thirds of them methamphetamine. Heroin comes in second in the most common illicit drugs detected by forensic analysts.

Exposure can be prevented by wearing gloves and removing them before touching anything else, he said. The most common way for people to be exposed to a drug like fentanyl is by touching their mouths or food after handling the drug.

“It’s still pretty unlikely to get enough that it could be harmful, but with a very potent chemical like this, it’s appropriate to give it special service and prevent additional contact,” Hendrickson said.

‘THIS IS A WORK IN PROGRESS’

Multnomah County prosecutors have a long-standing requirement that a field drug test must be combined with additional evidence, such as a confession, before filing charges in drug possession cases. Otherwise, they require a state lab analysis.

They will continue that approach, said J.R. Ujifusa, a senior deputy district attorney who supervises drug prosecutions in the county.

“It may delay some cases a little bit and it may not, depending on the timing of the lab,” he said. “I think this is a work in progress.”

The county has recently tried to direct low-level drug offenders caught with small amounts of drugs into treatment instead of jail. The success of the new approach depends on early intervention, she said.

“If I have to wait for a lab report six months or nine months down the road, I miss the best window to actually address somebody’s addiction,” Clarkson said. “Nine months from now they will be a lot less interested in treatment to avoid a criminal charge.”

Clarkson added that the state police make up a small percentage of drug cases coming through her office; the majority of cases come from Salem, Keizer and Woodburn, all that continue to use the field tests, she said.

The Clackamas County District Attorney’s Office said it will still insist on lab work before it pursues charges in drug cases. Most police agencies in the county, including the Sheriff’s Office, have stopped using field tests, said Chief Deputy District Attorney Chris Owen. 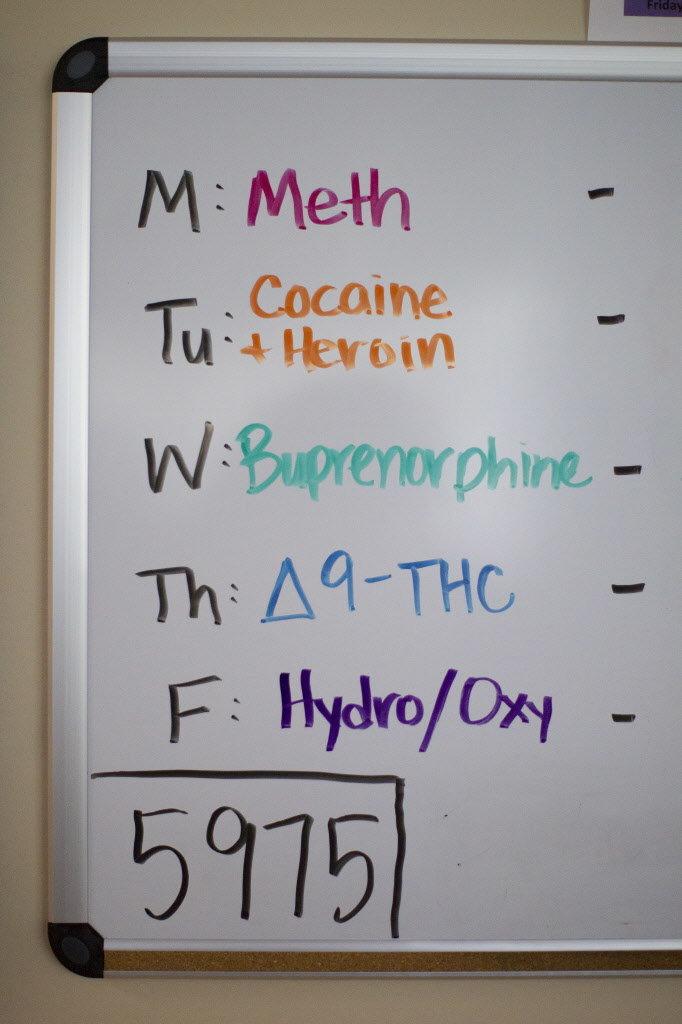 Above: A dry-erase board at the state police crime lab. Fentanyl remains a small portion overall of the cases that move through the lab. Last year, police statewide sent in more than 11,000 samples in drug investigations — about two-thirds of them methamphetamine.

In Washington County, prosecutors said they’ll look for other evidence to establish probable cause in drug possession investigations when they don’t have test results from the field.

For instance, if a suspect has a glass pipe with what appears to be methamphetamine residue on it and admits to having the drug in his pocket, that’ll likely be enough for Washington County prosecutors to pursue criminal charges, said Bracken McKey, a senior deputy district attorney.

Other investigations may require scientific analysis before the case can proceed, he said.

In the past, the office sent about a third of its drug cases to the crime lab, he said.

McKey said prosecutors are fine with the state police policy shift, but he expects it to drive up the number of cases sent to the crime lab.

“The net result is there are going to be a lot more cases tested at the crime lab by the drug team and the question is do they have the resources to keep up with the amount of work?” he asked. 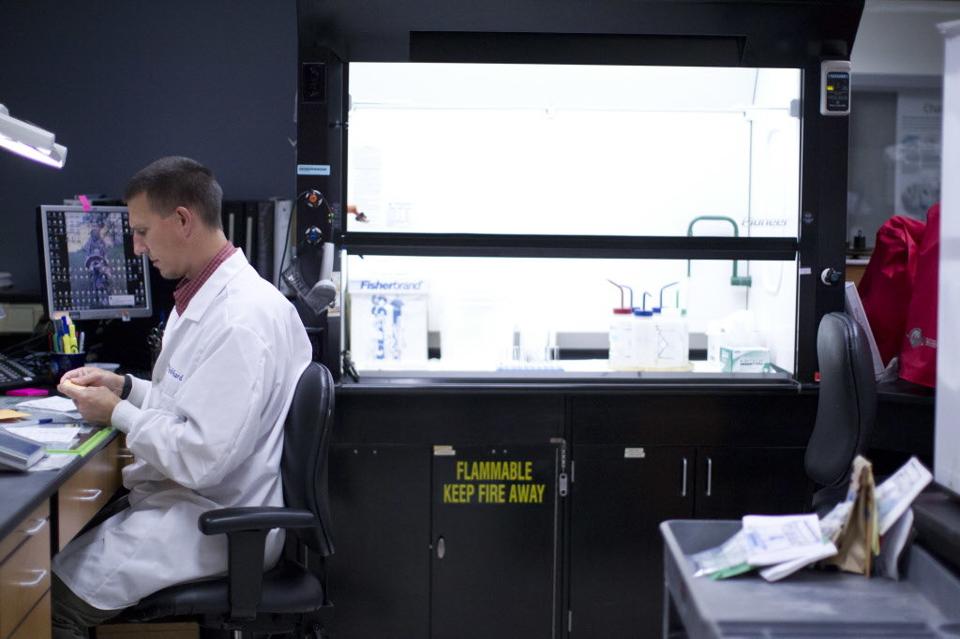 Above: Gary Gebhardt, a forensic scientist with the state police crime lab, analyzes confiscated street drugs, including heroin, methamphetamine and other synthetic drugs.

‘TREAT THE STUFF WITH RESPECT’

It’s too soon to say how the policy change will affect the workload, said Jon Dyer, who oversees the lab’s drug analysis unit in Portland, the largest of the state’s five crime labs.

The lab is already working through a backlog of about 600 drug cases, he said. Average turnaround time is about 100 days, though urgent cases tend to move more quickly through the system, he said.

An additional three analysts are expected to join the drug unit this year, bringing the total to six — staffing that Dyer expects can handle the uptick in demand.

“We are playing the wait-and-see game,” he said.

Meanwhile, police agencies in Oregon are still figuring out how to deal with keeping officers safe when they handle fentanyl.

“We thought it was better to err on the side of caution, but now we are giving it a second thought,” said Chief Jeff Fossholm. “We are going to loosen it up a little bit to go back to field testing.”

Starting this month, Silverton officers will team up to perform the test to ensure that one person is on hand in case the other becomes exposed to the drug. Police will wear gloves and goggles when handling any drug they plan to test in the field.

In Portland, where for now the tests are still in use, officers are told to handle suspected fentanyl with care.

“We basically are telling officers, you know, if you find anything, a powder substance, make sure you don’t do anything to cause it go to go airborne,” Capt. Mark Kruger said.

“As long as you treat the stuff with respect,” said Kruger, “you can mitigate the threat.”

Oregon job growth picked up again in December, and state unemployment hit a record low in 2017