Protestors in Hong Kong have burned LeBron James jerseys after the NBA star said that freedom of speech can lead to “a lot of negative”.

James made his comments after the fallout between the NBA and China over the anti-government protests in Hong Kong. The lucrative relationship between the league and China has been damaged since the Houston Rockets general manager, Daryl Morey, tweeted in support of the protestors earlier this month. Morey subsequently deleted the tweet but China has threatened to cut ties with the NBA, and some Chinese companies have backed out of broadcasts and sponsorship deals.

On Tuesday, a group of around 200 gathered on courts amid Hong Kong’s high-rise buildings, chanting support for Morey and obscene epithets about James. One person threw a ball at a photo of James while others burned and trampled on jerseys bearing his name.

“People are angry,” said James Lo, a web designer who runs a Hong Kong basketball fan page on Facebook. He said he’s already received a video from a protester that showed him burning a No 23 jersey bearing James’ name.

On Monday, James was asked about the strained relationship between the NBA and China. “I don’t want to get into a … feud with Daryl but I believe he wasn’t educated about the situation at hand and he spoke,” James said. “Just be careful what we tweet … even though, yes, we do have freedom of speech. But there can be a lot of negative that comes with that too.” James later said he meant Morey wasn’t educated on the repercussions of the tweet rather than the situation in Hong Kong. Law enforcement have used live ammunition on civilians after months of demonstrations in Hong Kong.

Lo said James’s comments had infuriated many in Hong Kong. “Students, they come out like every weekend,” said Lo. “They’ve got tear gassed and then they got gun-shot, like every weekend. Police beating students and then innocent people, like every day. And then he just comes up with something [like] that. We just can’t accept that.” 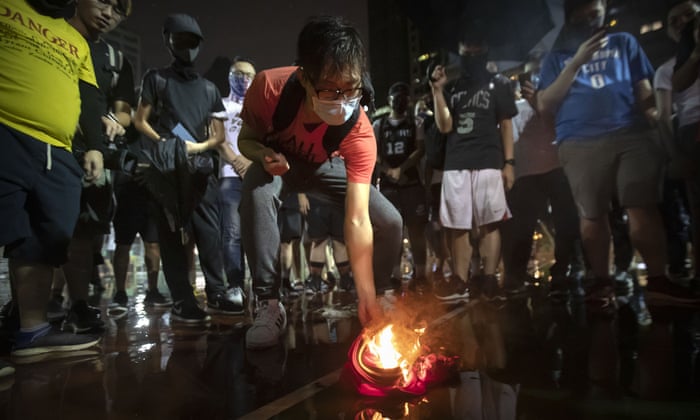 NBA players weren’t made available before or after recent pre-season games in China, which CCTV didn’t broadcast, and several companies and state-run offices reportedly severed their ties with the NBA over Morey’s tweet and the league’s response to it.

Protesters said James was guilty of double standards, because he has used his influence as a star athlete to promote social causes in the United States. “Please remember, all NBA players, what you said before: ‘Black lives matter.’ Hong Kong lives also matter!” one of the protesters, 36-year-old office worker William Mok, said as he addressed the crowd.

Yahoo Sports estimates that the dispute with China could depress the league’s salary cap – and therefore NBA wages – by up to 15% next season. Some protestors thought James’s comments had more to do with money than politics. “James was trying, you know, to take a side, on the China side, which is like ridiculous,” said Aaron Lee, a 36-year-old marketing director. “He was being honest, financially. Financial is money. Simple as that. LeBron James stands for money. Period.”

-Haven’t seen or talked to my family 5 years
-Jailed my dad
-My siblings can’t find jobs
-Revoked my passport
-International arrest warrant
-My family can’t leave the country
-Got Death Threats everyday
-Got attacked, harassed
-Tried to kidnap me in Indonesia

FREEDOM IS NOT FREE

One NBA player has appeared to voice support for the protestors in Hong Kong. The Boston Celtics’ Enes Kanter, who is exiled from his native Turkey due to his opposition to the country’s president, Recep Tayyip Erdoğan, tweeted a list of issues he has faced due to his political beliefs. They include seeing his father imprisoned and having his passport revoked. At the end of the tweet he wrote “FREEDOM IS NOT FREE”.